Scenic America honored its founding members during its recent Affiliates conference in Salisbury, NC.  The three “Founders Awards” were given to Ruth Becker, Charles Floyd and the family of Marion Fuller Brown. 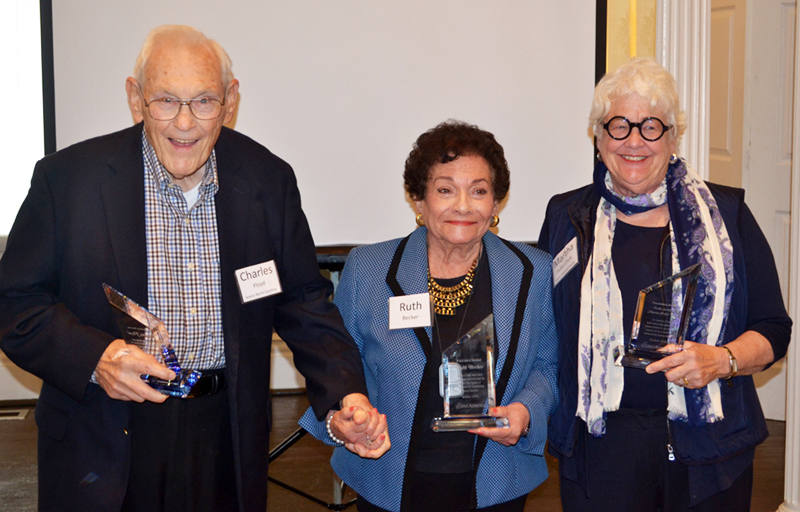 Charles Floyd told the story of Scenic America’s beginnings: “In 1977, my friend John Hassell went from the Georgia DOT to be Assistant FHWA Administrator in the Carter administration.  John knew of my interest in billboard regulation and that I had testified for Senator Stafford’s bill to reform the Highway Beautification Act.  He suggested that FHWA establish a National Advisory Committee to examine the Act, see how it was working, and make recommendations for improvement.”

This National Advisory Committee was the key to the establishment of Scenic America.  The Committee brought Charles and others from around the country together over a shared desire to see the Highway Beautification Act reformed and the landscapes along America’s roadsides protected and improved.

“At the conclusion of a meeting in the Spring of 1981, a group of us got together in a conference room at the Holiday Inn.  After a discussion, we agreed that we needed an organization.  Of course, we had no money, we had no one who could run the organization, we had nothing.  But we still wanted to form what we then called the Coalition for Scenic Beauty,” Floyd said.  “Then Ruth Becker, who ran the Pennsylvania Roadside Council, said that she would undertake the task.”

Becker offered to house the Coalition’s first office inside PRC’s, which she did for three years before the group established an office in Washington, hired an executive director and changed its name to Scenic America.

Upon accepting the award Becker said: “As I look out around this room I am so filled with hope for the future.  To quote William James: ‘Act as if what you do makes a difference. It does.’  My friends I thank you for this honor.  Good luck and God bless you all.”

Another vital member of the founding group was Marion Fuller Brown, a state representative from York, Maine.  Ms. Fuller Brown led the effort to pass a 1977 law in her home state that led to a total ban on billboards.  The last billboard in Maine was removed in 1984.

Upon accepting the award in memory of her mother, Scenic America Board member Martha Fuller Clark said: “My mother was very proud of helping to establish Scenic America and her family is equally proud.  Her legacy lives on in this organization and in what she accomplished in Maine.”