The city of Knoxville, Tenn. has passed a new ordinance for regulating on-premise signs that will result in a much more scenic city in coming years.  The new rules are the result of four years of work and negotiations between city, community and business leaders, the sign industry and local scenic supporters led by Scenic Knoxville. 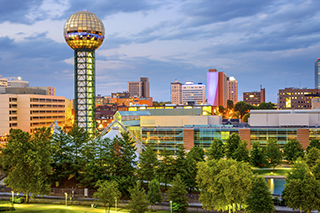 The city’s longstanding sign ordinance had allowed for on-premise signs as tall as 50 feet in most areas of the city, and as a result Knoxville’s commercial corridors are teeming with unsightly sign clutter.  In 2011 the Knoxville City Council formed a sign task force to revise the ordinance and improve the appearance of the city.  Though the task force was heavily weighted with pro-sign members, two community representatives (including one member of Scenic Knoxville) made a significant impact on the task force’s recommendations.

A first proposal sent to City Council in 2014 was far from the ideal that scenic supporters were hoping for.  Scenic Knoxville worked hard to organize community support for better sign control, and ultimately their efforts paid off.  On July 21, 2015 the Knoxville City Council passed a new sign ordinance that incorporated many of the provisions proposed by Scenic Knoxville and which will result in a much more beautiful city in the future.

Some of the provisions that scenic supporters fought for and received include:

Scenic Knoxville and its supporters are to be congratulated for this long-fought and hard-won victory which will build on earlier successes to ultimately lead to a more beautiful city. Previous victories by the group and its supporters include a ban on digital billboards in the city and in Knoxville county, and a prohibition on new on-premise electronic signs in the city.