There was a time when Lori Wray could never have imagined herself in front of a podium, preparing to speak to public officials about her fervent disapproval of newly proposed sign ordinances. As a journalism graduate from California State University, Long Beach, Wray was much more comfortable conducting interviews and behind the scenes work. And yet, about ten years ago, Wray found herself waiting her turn to speak to the city council in Reno, Nevada. 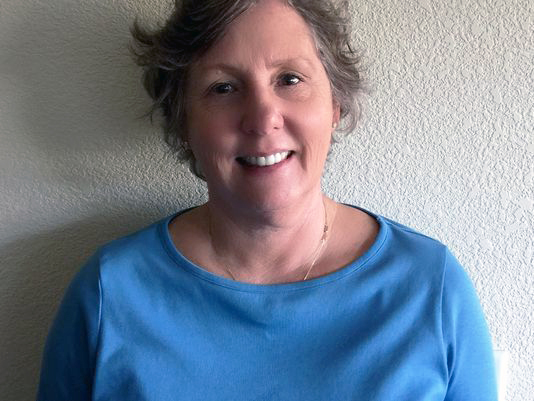 In spite of her nervousness, she proceeded to the podium to speak her mind, encouraged by fellow citizens and driven by her desire to protect her community from billboard blight. Ultimately her passion for conserving and enhancing the scenic beauty of her community overcame any uneasiness with public speaking, and eventually led her to join the Board of Directors at Scenic Nevada.

Wray moved from Los Angeles to Nevada in 1991 with her husband, Mark, in search of a small close knit community to raise their three children. Tired of the traffic and smog of southern California, the Wray’s found happiness in the open spaces and boundless natural scenery of Reno. They loved the tranquility of their little neighborhood until 2002, when housing developers proposed a small development on 8-10 acres of land neighboring their property.

It was clear she was the perfect fit. “I just love the people in our community,” Wray said. “When something comes up I say: what are we going to do about it? Everyone on the Scenic Nevada board feels the same way.”

Scenic Nevada was formed to help protect scenic beauty and fight billboard blight in Reno. In 2000, the group, then known as Citizens for a Scenic Reno, gathered enough petition signatures to get an initiative on that Fall’s ballot prohibiting new billboard construction and new billboard permits in the city. The initiative passed with 57% of the vote. What seemed like a clear victory turned into a 17-year fight to get the city to enforce the will of the voters. Scenic Nevada would find itself working hard as a public watchdog in subsequent years, keeping the persistent efforts of the billboard industry to violate the citizens’ initiative at bay through legal action and public outreach.

In February 2008, the Reno City Council voted to start work on an ordinance to allow the construction of new digital billboards. This decision marked a turning point for Wray and the Scenic Nevada team in their long fight to protect the will of the voters. “Billboards are a blight on the community and the digital billboards are so offensive,” Wray said. “We have 250 days of sunshine and the sky is bright blue, do we need these eyesores that are just distractions?”

For four years, the Reno Planning Commission held public hearings on the sign code and Scenic Nevada was present at every one. Wray knew the proposed law was a violation of the voter initiative, and she and Scenic Nevada undertook a major public relations campaign. They started a petition, and conducted a survey that found 80% of Reno residents believed there were already enough or too many billboards in the city. “People don’t support billboards, they support beauty,” Wray said. It was Scenic Nevada’s job to raise awareness and educate the public about the threat to the voter initiative, she said

In 2012, a final code was recommended and approved by the city council, permitting digital billboards in Reno for the first time. For Wray, “this was the straw that broke the camel’s back.”

Scenic Nevada filed a lawsuit within days of the passage of the ordinance.

The lawsuit ended up going to the Nevada Supreme Court, which ruled partially in Scenic Nevada’s favor, and stated that the Reno City Council had unconstitutionally amended the people’s vote. And in a subsequent lawsuit, filed by Scenic Nevada, a district court judge ruled that the permits given in that time were now void.

During the legal wrangling, meanwhile, Scenic Nevada had ramped up another public relations campaign, which included running full page ads and another petition and voter survey in which 78 percent said new billboards should be banned. The city council began to see the need for change. “They came around to Scenic Nevada’s idea: the only thing you could do was to ban billboards outright,” Wray said.

In 2017 the Reno City Council approved the billboard construction ban. This was the moment Wray had been waiting for. “I can’t even tell you what it feels like, because all these years we’ve been told no,” she said. “We needed better regulations and we got them. Not great, but better.”

There are still unused permits lingering in the hands of billboard companies, but the last one is set to expire in 2025. During a court-ordered settlement conference, Wray and the Scenic Nevada board agreed to a compromise. Billboard owners got to keep their previous permits in exchange for dropping lawsuits meant to overturn the new billboard ban. On the 17th anniversary of the original voter initiative, the Reno City Council approved the settlement agreement, ending litigation and ensuring the people’s vote would finally be enforced.

Wray’s passion for beautification in Reno influenced not only Scenic Nevada, but her family as well. Mark Wray ended up joining the coalition as a pro bono attorney in 2010 after witnessing his wife’s devotion first hand. Wray expressed her gratitude for her husband’s continued support, as she still dedicates most of her volunteer time to keeping tabs on the billboard industry in Reno and the surrounding communities. She also shared her deep appreciation for Doug Smith and the other Scenic Nevada founders for their hard work getting the 2000 initiative on the ballot and passed by the voters.

As a 15-year veteran of the coalition, Wray now feels confident behind the podium. Although the research, letter writing and meetings can feel intimidating, it’s all worth it when the vote is in Scenic Nevada’s favor. She encourages fellow advocates, no matter what their cause, to remember they are not alone. “Seek out other people in the community that feel the same way you do,” Wray said. “Nonprofits or groups that represent your position would be so happy to have another volunteer.”