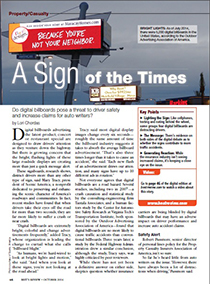 “Certainly any distraction that takes a driver’s eyes off the road is dangerous and can lead to increased crash risk,” said Bill Windsor, vice president of safety for Nationwide Insurance. “And there is, through research, evidence that digital billboards do get drivers’ attention.”

The insurance industry would be “well-thought to conduct studies of its own on whether digital signs are causing accidents, not just for the protection of consumers but also to protect carriers’ own pocketbooks, because they are ultimately the ones paying for this,” added James Ballidis, president of the law firm Allen, Flatt, Ballidis and Leslie.

Insurance experts said after an accident occurs it’s not always easy to determine the reasons for the crash. “In litigation and disputes that surround these cases, it’s easier for a plaintiff’s attorney to just say ‘someone rear-ended my client because they were distracted’ than to try and prove some signage had something to do with it,” Ballidis said.

Scenic America President Mary Tracy was interviewed for the article and she believes that the insurance industry has a role to play in promoting driver safety. “Carriers care about safety and property values, things that are definitely impacted by the proliferation of digital billboards, so they can become an important voice for reasonable policy making in this area,” Tracy said.