There have been communications towers in North America since the turn of the 19th century when optical telegraphy was introduced from France to American port cities. These early facilities were modest twenty to thirty-foot structures from which flags and other signaling devices were used in line-of-sight systems to communicate in code.

In 1844, Samuel Morse built the first successful electrical telegraph line laying the groundwork for a network of 30-foot poles that would mark the margins of roads and railroads throughout the nation before the end of the century. By the time Guglielmo Marconi successfully demonstrated his wireless communications system in 1899, the horizons of most US cities were marred by a visual cacophony of electricity, telephone and telegraph wires and poles. 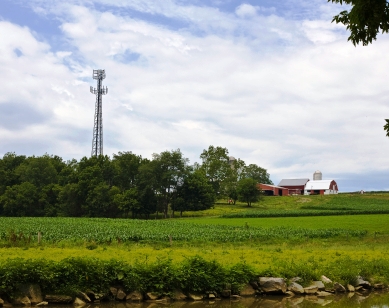 Marconi’s wireless unbound communications from an infrastructure strung together by cables and wires. For the first two decades of the twentieth century, amateurs, the government, and inventing entrepreneurs raced to build wireless stations with increasingly higher antennas to reach and receive more distant points. Radio, which combined the technological achievements of telephony and wireless telegraphy, rapidly spread across the nation in the 1920s bringing with it taller towers in greater numbers.

With the proliferation of towers and antennas came complaints that towers adversely affect scenic and cultural resources while also reducing property values and interfering with existing radio and later television reception.

One early complaint documented in the media came in 1944 when NBC’s Blue Network proposed building a 250-foot tower in suburban Fairfax County, just across the Potomac River from Washington, DC. Residents mounted a vigorous opposition effort because they believed the tower would “reduce the value of their property and desecrate the historical landmark Langley,” wrote the Washington Post in June 1944.

Four years later, another proposed Arlington tower — this time a 400-foot television tower — spurred residents into action with concerns that the structure would “spoil the beauty of a distinctively residential area.’

a fifteen foot antenna atop the Gothic Revival-style Riverside Church. When a wood mockup appeared, church members complained that “the proposed antenna would spoil the appearance’ of the 1927 building.

So how does communications infrastructure impact the landscape and the people who live, work, and play in it?

In the 1960s Congress passed several landmark environmental protection laws. Two of these, the National Historic Preservation Act of 1966 and the National Environmental Policy Act of 1969 (NEPA), are key to understanding the framework within which the FCC is required to consider visual impacts to sensitive historic properties as well as cultural and natural landscapes. In passing NEPA Congress unambiguously stated that Americans should be assured of “safe, healthful, productive, and esthetically and culturally pleasing surroundings.”

Visual impacts, especially those associated with tower structures (notably, electricity transmission towers), have long been an element of NEPA compliance. Even states with strong environmental compliance laws (such as New York and California) have strong visual effects standards. But it is up to the individual federal agencies required to comply with NEPA to create compliance rules and a compliance regimen and in 1974 the FCC did just that.

“The principal, and probably the only, significant environmental effect is the visual impact of the completed facilities,’ wrote the FCC about the potential environmental impacts of microwave relay stations in its 1974 order implementing NEPA rules. When the FCC amended its NEPA rules in 1986, the safeguards for “areas recognized either nationally or locally for their special scenic or recreational value’ were gone. In their place was guidance noting that such aesthetic issues are best handled by local planning and zoning authorities and yet a decade later, the Telecommunications Act eliminated many local barriers to increased infrastructure.

Within four years of Congress passing the Telecommunications Act of 1996, the FCC was pushed by historic preservation interests to explore how to best comply with the NHPA. The end result was yet another modification in 2005 of the FCC’s NEPA rules that include a nearly 100-page report and “programmatic agreement” that dwarfs in density the media ownership rules that federal judge Richard Posner dubbed in a 1992 landmark ruling as “Rube Goldberg complexity.” One analyst of FCC policy wrote that the agency “often seems more adroit at jerry-rigging intellectually sloppy deals to appease industry factions.”

Despite its verbiage and breadth, the programmatic agreement failed to define how a tower can alter the character and use of historic properties, including buildings and landscapes. In fact, the FCC and the Advisory Council on Historic Preservation approached the problem with blinders on, never once looking to the advances in visual impact assessment made in the electricity generating and transmission industries nor were they interested in successful approaches developed in Europe.

Visual blight and visual impacts are quantifiable and may be evaluated and mitigated effectively through good faith consultations with stakeholders. The outcomes of siting towers and antennas in sensitive cultural and natural landscapes without thoughtful consultation are many.

These include broadcast and wireless telecommunications towers built in farm fields and radio towers in Civil War battlefields.

They are historic former municipal water tanks that are more aptly described as telecommunications towers or historic buildings with unsympathetic alterations.

Residents of rural historic districts change the ways they use their interior and exterior space to avoid beacon lights and views of poorly sited towers. And, visitors to historic urban oases where landscape photography has defined the visitor’s experience for more than a century avoid photography historic buildings and landscapes because a tower now intrudes.

Contrary to arguments by communications industry lawyers and FCC functionaries, looks do matter. NEPA says so. The NHPA says so. Myriad federal court cases say so: “The character of the environment affects the quality of life and the value of property in both residential and commercial areas,’ wrote Justice Stevens for the United States Supreme Court in a 1984 case. The FCC continues to raise the bar on what constitutes an impact to sensitive scenic areas. To even out the regulatory asymmetry stakeholders need to be informed about the FCC’s environmental rules and know their local and state environmental laws. And, local planning and zoning officials need to be better informed about their standing in tower siting cases. Remember, Ralph Waldo Emerson once wrote, “The health of the eye seems to demand a horizon.’