A new report submitted to the Secretary-General of the United Nations General Assembly finds that human cultural identity and expression are being threatened around the world by increasingly omnipresent advertising and marketing practices, and in particular a growing commercialization of the public realm. 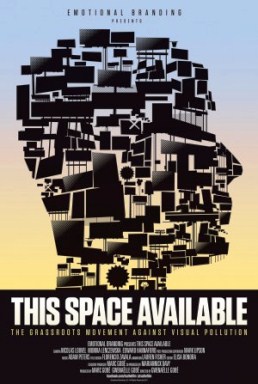 To learn more about the effects of outdoor advertising around the world check out This Space Available on DVD or streaming.

The report was prepared over the course of a year by Farida Shaheed, the U.N.’s Special Rapporteur in the field of cultural rights. Ms. Shaheed will present the report to the General Assembly in October 2014. The report concludes that member States should protect citizens from undue levels of commercial advertising and marketing.

Highlights of the Special Rapporteur’s findings include:

1. The myriad commercial messages people receive on a daily basis is striking (page 3)

2. Commercial advertising and marketing practices have an increasing impact on the cultural and symbolic landscapes we inhabit and more widely on our cultural diversity (page 3)

3. Today, people receive an ever-increasing number of commercial messages disseminated in a systematic and integrated manner across multiple media, in the public and private spheres, in physical and digital spaces (page 7)

4. While varying from one country to another, the level of commercial advertising seems to be on the rise everywhere (page 7)

5. Moving screens in public spaces are particularly intrusive. This technology exploits the fact that any motion at the periphery of our visual field automatically captures our attention, triggering increased levels of alertness and stress (page 8)

6. The issue of consent needs to be included in discussions about the impact of advertising and marketing strategies on human rights (page 9)

8. The number of outdoor advertisements, their size, locations and the technologies used, such as digital billboards and screens, render advertisements omnipresent and inescapable. Billboards obstruct people’s engagement with their environment, including parks, built heritage or the landscape, and, by exhorting people to become mere consumers, adversely affect their sense of citizenship. The Special Rapporteur notes with concern the numerous cases of people having the windows of their houses covered by large billboards, despite their opposition, and of trees cut down to ensure greater visibility of billboards (page 18)

9. Billboards and other outdoor advertising devices affect far more than the private property on which they are installed; indeed, the commercial value of billboards is determined by the number of viewers passing by. Observers argue that, in reality, companies purchase public space rather than merely hire private property (e.g., a wall [ad] on a private building) (page 18)

10. Commercial messaging contributes to shifting practices towards consumption and uniformity. This has a significant impact on creativity and affects cultural and symbolic landscapes — whether physical or digital — and people’s cultural values and philosophical beliefs (page 21)

11. States wishing to protect cultural diversity need to protect their societies from undue levels of commercial advertising and marketing (page 21)

12. States have a particular responsibility in ensuring that public space remains a sphere for deliberation, cultural exchange, social cohesiveness and diversity (page 21)

13. The Special Rapporteur recommends that legislation, regulations and policies adopted by States and local authorities: (page 23)

14. The Special Rapporteur recommends that States define what public space is and how it should be used in a participatory manner (page 24)