Scenic America has presented its Stafford Award to former Pittsburgh Mayor Tom Murphy in recognition of his work as an advocate for sustainable development and scenic preservation.  The presentation was made during Scenic America’s recent board meeting in that city.

“The Stafford Award serves as Scenic America’s most prestigious award, having honored luminaries such as Lady Bird Johnson and Laurence Rockefeller,” said Scenic America President Mary Tracy.  “We are proud to honor Tom Murphy’s leadership and personal commitment to the environment and beautification efforts in the City of Pittsburgh.” 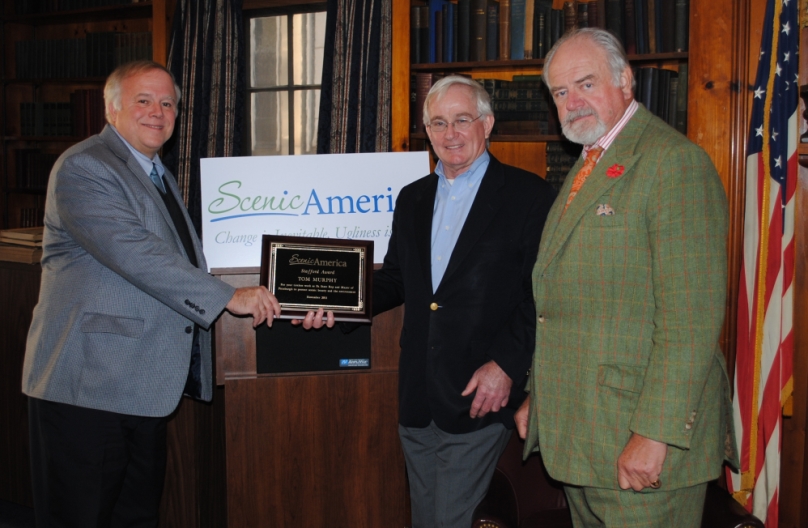 “Mayor Murphy’s vision for reclaiming Pittsburgh’s waterfront and downtown continues to unfold before our eyes,” said Mike Dawida, executive director of local affiliate Scenic Pittsburgh.  “Our blossoming image as a world-class city, widely recognized as both ‘most livable’ and a ‘best place to visit,’ owes a great debt to the bold and forward-thinking work of Tom Murphy as Mayor.”

Scenic America’s Stafford Award recognizes a diverse group of individuals and organizations whose leadership in fostering scenic conservation has had significant positive impacts, both locally and nationally.  The award is named for former United States Senator Robert Stafford of Vermont, for his efforts to reform the federal Highway Beautification Act and his longstanding concern for the environment.  Senator Stafford himself was the first recipient of the award.